A while back, I made a loose waisted Brumby skirt/Staple dress mash-up. Since then, I’ve worn it a couple times (especially on airplanes), but I was always dissatisfied with it. I enjoyed sewing it, because I was trying something new, and I liked the concept and the comfort.

However, in practice the neckline was wonky, the split sleeves didn’t sit right, and it was just too much of a sack. I knew I had to do something with it, because I love the Nani Iro Sound Circle double gauze fabric. Originally I was going to try to alter it but keep it as a dress, but in the end I decided to just turn it into a Megan Nielsen Brumby Skirt. 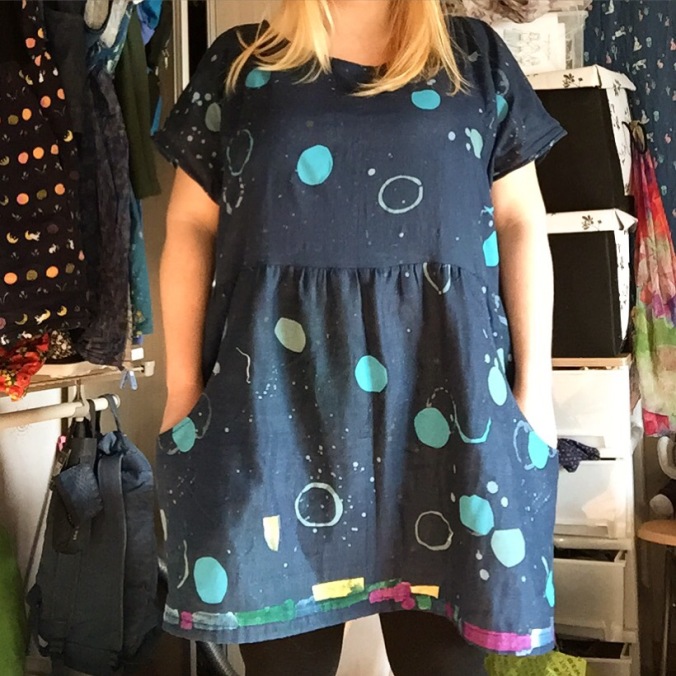 There’s something different about this Brumby, however– it has a shirred/elastic back waistband!

the shirred back waistband

I’ve been wanting to try this for ages, but it took me a while to figure out how to actually do it. In the end, it worked out so well, and I’m so happy with it! I know this skirt will get a lot more wear than the original dress. 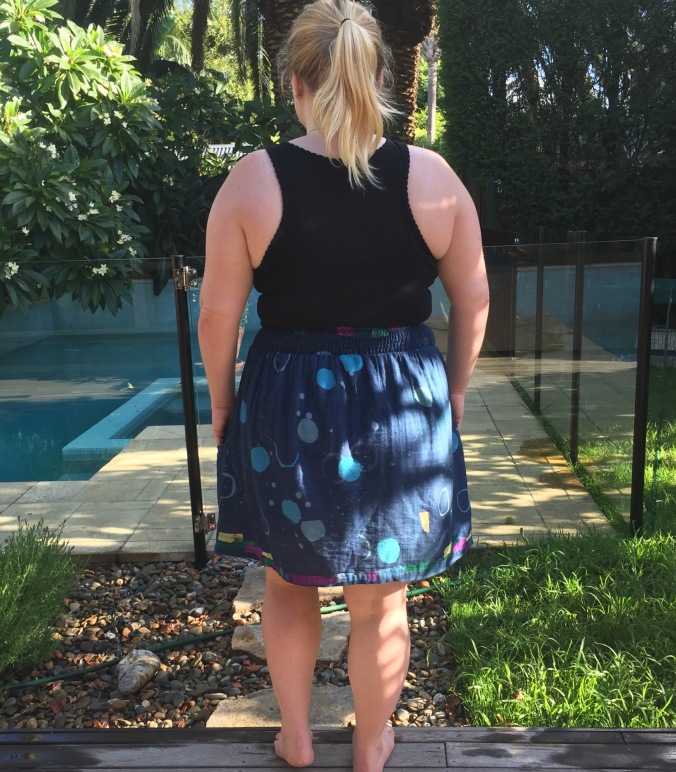 The stretchiness means it’s extremely comfortable, and will be absolutely perfect for travelling, because even if my weight fluctuates it’ll still fit. I’m definitely doing this hack on my next Brumby skirt– if anyone would like a tutorial to see how it’s done, let me know, because I will be making it soon 🙂 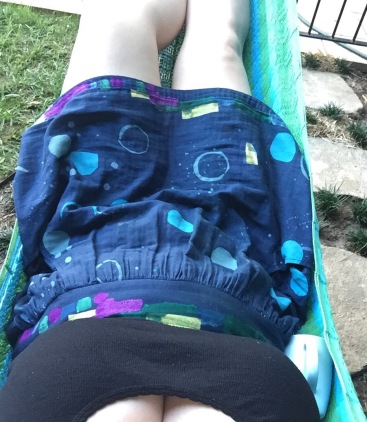 My disorganization is vast, my procrastination knows no bounds. If I have any hope of getting things done in a timely manner, I need lists. Something to work through with items I can check off. So, here are some lists.

To Sew from the Stash– DO THIS FIRST!

What does one say in the first post of a sewing blog? I have no idea. Especially given that I’m not totally sure where I’m going with this whole blog thing. I suppose it doesn’t really matter– I’m not even sure whether I’m going to share this blog with anyone, and even if I do, I’m not expecting people to actually read it. I guess I can write about whatever I like. For now, I think I just want to write about one thing: How I got into sewing. This is going to be long, probably the longest post I ever write, and I’d ask forgiveness for that– but, given that it’s a new blog so I haven’t got any readers, that would just feel a bit silly.

In a way, sewing is a fairly new thing for me. I just bought my sewing machine in April 2014 (Ok, let’s be real, my parents bought it for me),as a solution to the problem of too much free time that I find myself with here in Korea. However, in another way, it’s not so new– it’s sort of a thing I’ve been moving towards my whole life.

My mother has always sewn, and always seemed keen for me to learn, although her (somewhat less than gentle) attempts at sewing instruction in my early teen years didn’t stick. Beyond a wrap skirt when I was 13 or so, and a pair of pajama shorts later on which I remember starting but not finishing (she probably finished them for me), it’s not something I wanted to spend any time on.

Nonetheless, I did have fond memories of all the things my mother had sewn for me as a child. The bright tropical fish sister dresses. The red corduroy heads of the hobby horses we got one christmas. The matching skirt and top set in a shiny black with gold stars for a primary school disco. I always admired that she sewed, loved the things she’d made me, and planned to learn myself– one day. It just took a while for One Day to come.

It nearly did, in my second year of university, when I went out and bought myself a dodgy little sewing machine. The problem was that I lacked full commitment and was very unconvinced that I could actually do it, so I bought a very cheap machine that was little better than a toy. It was so terrible, and ended up so unused, that I don’t even consider it my first machine at all. That tiny monstrosity had very few stitch options, lacked the weight to stay in place, and was constantly getting caught and tangled.

If I’d invested in proper equipment, I’m sure my experience would have been very different– but as things were, I probably used it two or three times at most before chucking it aside. I think the only product of that machine was a single skirt (an elasticated rectangle with unfinished seams and a wonky hem), which I haven’t seen in years. In the next few years, I made a couple skirts (refashioned men’s shirts, one of which I actually do still wear occasionally)– – and did some minor alterations and repairs. These were done mostly by hand and despite my interest, I was not patient enough to keep going.

So when then did One Day finally come? It came a few years on, when I found myself in Korea, in a somewhat dissatisfying situation. It wasn’t my job–I’m a teacher at a tiny little rural elementary school (rural by Korean standards), and I absolutely loved it (and still do). Here’s the problem: There were some really great fellow English-teachers in my town, but unfortunately there were too few to provide as active a social life as I had enjoyed in my later years of university. Then, combine this with a not overly demanding work schedule, and the fact that I lived alone– family-less, boy-friendless, roommate-less, just generally devoid of people who were somewhat obligated to put up with me according to my whims. On top of that, add a total lack of actual hobbies (beyond the Korean study I did at cafes from time to time). What do you get? Far too much free time, and the perfect recipe for boredom, loneliness, emptiness, existential ennui (to put it melodramatically).

Clearly, I needed a hobby– and given all the time I spent stalking sewing blogs online, sewing was a pretty obvious choice. However, the old lack of confidence in my capabilities lingered, and my salary is not so generous that I wouldn’t hesitate before dropping a couple hundred bucks on a hobby which might not stick (and I knew that this time, if I was going to do it, I had to do it right!). The biggest step, obviously, was to buy the machine. I really wished I could walk into a store and talk to someone who knew what they were doing, but living in a country where my language skills are minimal, that wasn’t really an option. So I spent a while perusing sewing machines online, reading reviews, and trying to come to a solid decision (sewing up a couple of felt and cotton plush squirrels by hand along the way– hence the name for this blog!).

My mother was the one who inspired my interest in sewing at the very beginning, and it’s fitting that she gave me the final little push I needed. After I mentioned to her that I was interested in taking it up, but was hesitant about buying a machine, my parents eliminated the financial aspect of my indecision by offering to buy one for me for my birthday. All I had to do was pick it out and order it, and they would pay. That was enough– within a few weeks, and with the help of a Korean friend, I’d picked out a machine on the Korean online shopping site Gmarket and it was on its way.

There it is, my real first machine, my Brother XL-3500. I haven’t really got anything to compare it to, so I don’t know if it’s the best option I could have gone with, but I am very happy with it. When I first took it out of the box, setting it up and figuring out how to use it seemed incredibly daunting. It’s strange to remember that feeling that I’d never remember how to thread it without consulting the manual, when now it feels like the simplest thing in the world. Over time, my machine and I came to understand each other, and settled into a comfortable, affectionate relationship. In fact, as I write this, I am home in Sydney to visit my family over the winter school holidays, and I’ve been borrowing my sister’s machine– I feel like a traitor, and really miss mine!

It’s January now, early enough in the year to still hear talk of New Year’s Resolutions. To be honest, I haven’t thought about mine all that much (I never keep them anyways), but when I do, my mind keeps drifting back to sewing. All the things I want to make. All the skills I want to learn. All the fabrics I want to buy.

I also want to document it all much better, so I can really track my progress and accomplishments– which is what brings me to this blog. That’s the whole point of this– it’s really for me, rather than for any audience. That said, if any of my posts ever provide encouragement or inspiration to someone else, all the better! After all, reading other people’s sewing blogs is what really renewed my interest in sewing, and encouraged me to finally turn One Day into Today.